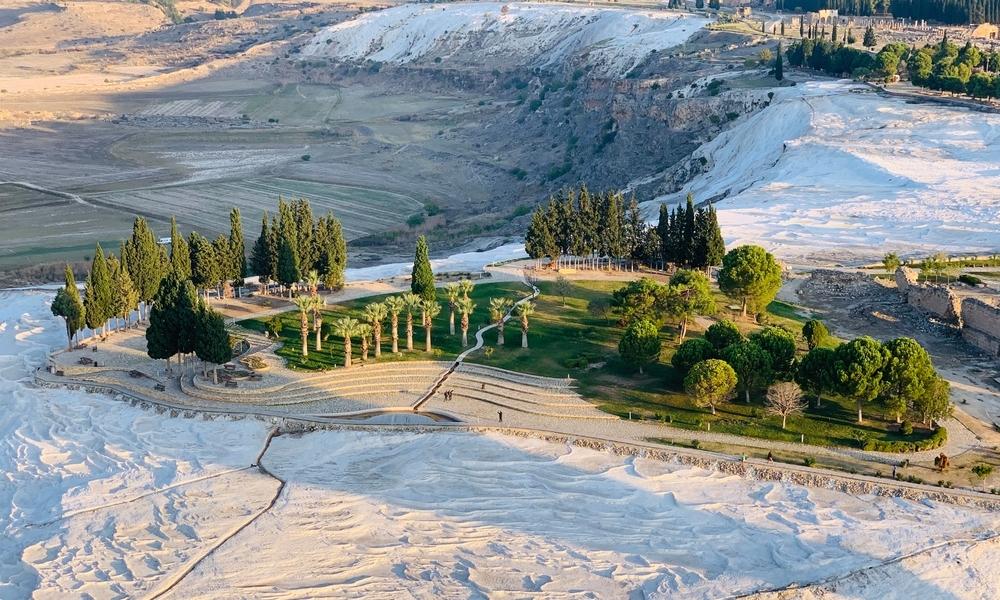 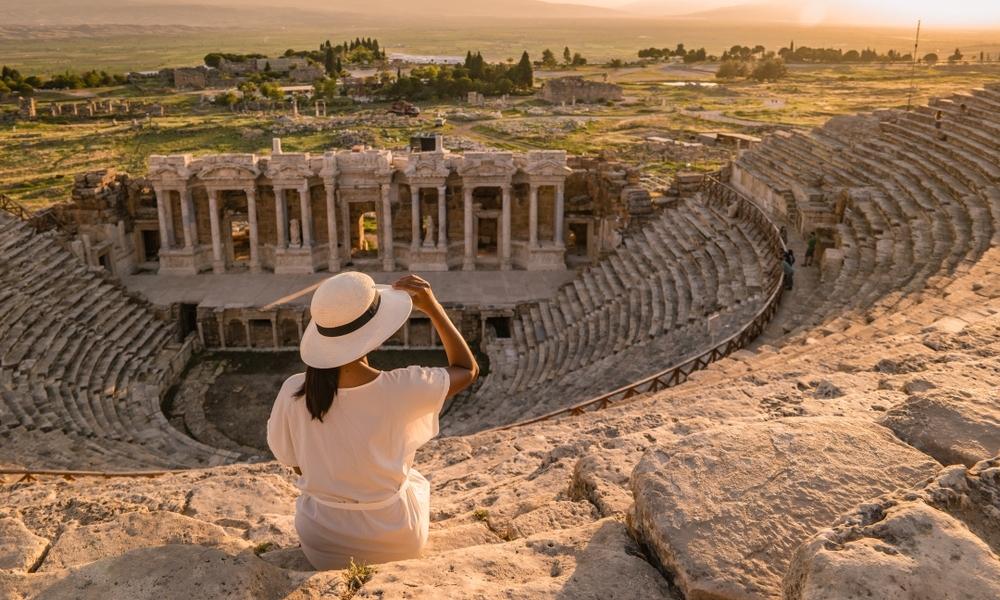 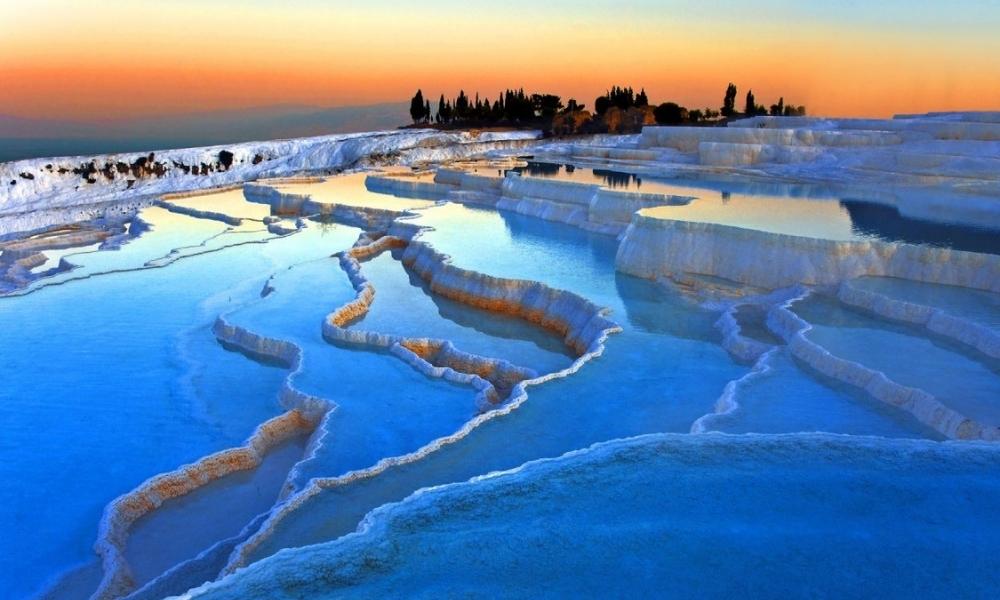 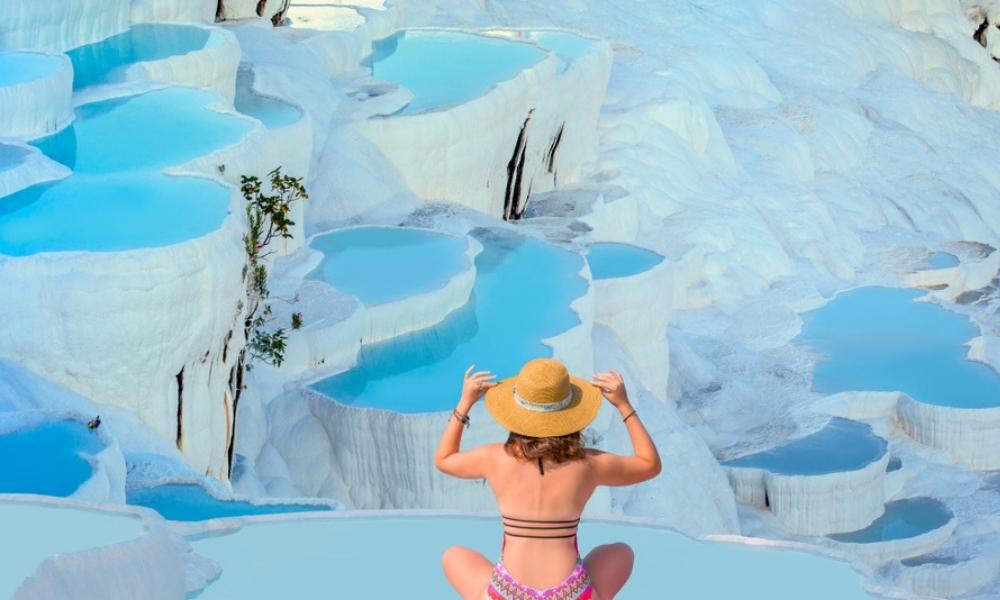 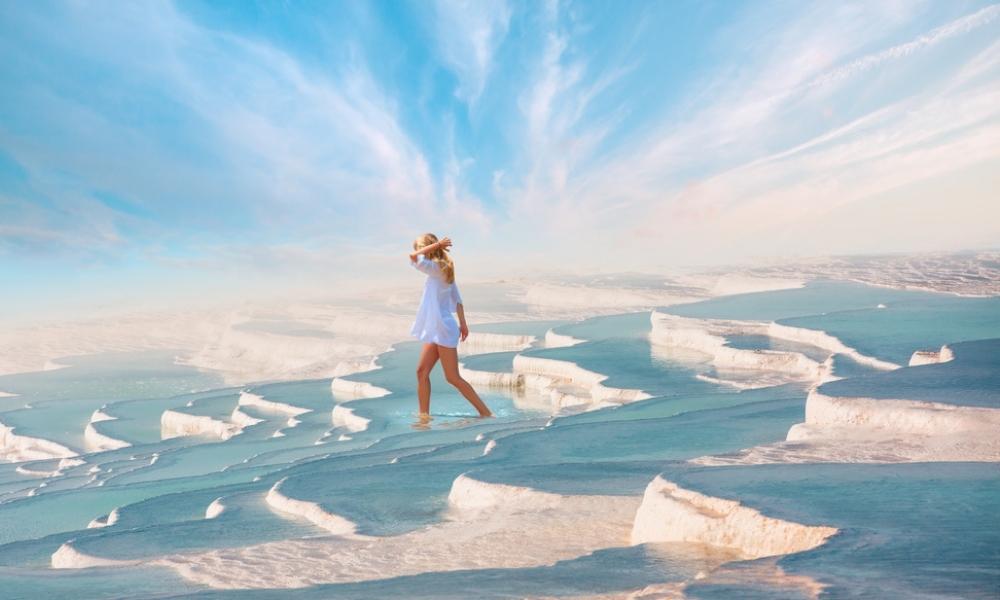 A perfect work of mother-nature and unique in the world. Turks call it cottoncastle for a good reason.

A beautiful and spectacular natural site, “unique” in the world therefore it is under protection by UNESCO World Heritage List. Thermal spring waters have carved this fantastic formation of stalactites. The thermal waters have been used since Roman times for their proven therapeutic powers. Situated on the plateau are both the thermal centre with its motels, thermal pools and ruins of the ancient city of Hierapolis. Here you will find the ancient thermal baths, which have been restored and converted into an archaeological museum. We will see the importance of the ancient city and some secrets of it. You can also get the beauty of her if you swim in the Cleopatra Pool. So you may need swim wear during this tour if you want. After a full day of exploring you will be returned to your destination.

A perfect work of mother-nature and unique in the world. Turks call it cottoncastle for a good reason. It is a pure white mountain looks like a huge cotton pile when you look at it from a distance. Huge stalactites, cascades and mineral baths, pamukkalecataracts and basins form the characteristics of this mountain. Thermal hot springs which you will enjoy swimming in forms all these beauty. Since Roman times those hot springs are used for their therapeutic powers.

This place comes with a lot of ancient ruins as well, called “Hierapolis”. Some of the ruins still lay in the pool where you can swim in. Absolutely a dream for cleopatra. Hierapolis basically was a cure center because of this therapeutic hot springs.Pamukkale is one of the most extraordinary natural wonders in Turkey and perhaps one of the most attractive spot for tourists. Thousands of tourists visit this pamukkalespot everyday during the summer.

Cleopatra's pool near Pamukkale is open all the yearround and visitors are allowed to swim here.The water in this pool has some medicinal properties and believed to cure some diseases.

Do Not Forget to Bring

Drinks are not included in the price

There are only a few historical facts known about the origin of the city. No traces of the presence of Hittites or Persians have been found. The Phrygians built a temple (a hieron) probably in the first half of the 3rd century BCE. This temple would later form the centre of Hierapolis. It was already used by the citizens of the nearby town Laodiceia, a city built by Antiochus II Theos in 261–253 BCE. Coin of Eumenes II

Hierapolis was founded as a thermal spa early in the 2nd century BCE and given by the Romans to Eumenes II, king of Pergamon in 190 BCE. The city was named after the existing temple, or possibly to honour Hiera, wife of Telephus – son of Heracles by a Mysian princess Auge – the mythical founder of the Attalid dynasty.

The city was expanded with proceeds from the booty from the Battle of Magnesia in 190 BCE, where Antiochus the Great was defeated by Eumenes II, who had sided with the Romans. Thus Hierapolis became part of the Pergamon kingdom.